The Infinitri Peñíscola half starts and ends in a castle that appears in Game of Thrones… Need I say more?

You run into the beach like you are some sort of warrior and swim around the castle to a neighboring bay. You grab your bike and ride out into the hills. On your way back, the run is along the sunny but flat Peñíscola promenade that eventually brings you back to the castle for a picture perfect finish.

The Infinitri Series is family run. Manu is the Race Director and he has a huge presence on race day. Everything about the event was extremely well organised and accommodating to athletes of all abilities.

This event was particularly special because we were invited to it as two of Tim Don’s guests. And by “we” I mean Dan and Sam did… but Sam couldn’t go so I got to! Leading up to the race I was dealing with an ankle sprain from an embarrassing tequila inspired adventure in Cancun only 6 weeks before. It felt like it took forever to heal… I couldn’t run, I couldn’t kick when I swam – all I could do was ride. So I packed in a lot of time on the bike to build my fitness up. I was so nervous I’d show up to the race and not be able to finish because of it. Sometimes it’s nice to approach a race with no expectations. I ended up having a great race and I walked away from the weekend feeling motivated to train and get fast. I think Tim has that effect on people.

A couple of firsts for me …  First beach start and first sea swim! Both of which I was a little worried about…

Running into the water from the beach is definitely playing to my strengths. At one point, I was leading the pack which was NOT where I should be…  But it was fun to be up front even if it was brief! And it did make a mass start feel less congested, so I’m all for it. In the end, I’m not sure what I was worried about…

As for the sea swim… I had only swam in salt water twice before. And in both instances I found myself gagging from the taste of it. I wasn’t sure if I’d be able to make it through a whole swim course after those two experiences. So I made sure I did a practice swim the day before. And again… not sure what I was doing before… but it was FINE. Absolutely fine.

The water wasn’t warm, but it wasn’t freezing either. I didn’t feel any panic set in like I do when the water is so cold it takes your breath away.

And one thing I wouldn’t have thought to do without Tim’s advice, was dolphin dive as you come into the shallow finish. It’s shallow for 150m, where the quickest way forward is to get up, dive in, get up, dive in, etc. Turns out this is EXHAUSTING… But, it did see me past at least 20 people as I came in.

All and all, with a strong start to the race I really enjoyed the swim! 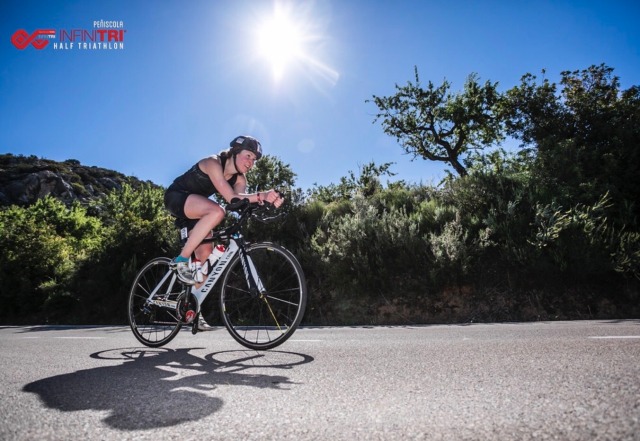 The bike course was through these beautiful rolling hills. You head out away from the coast and you do two loops in the hills before making your way back to transition. On race day, it was very windy. Tim said that his predicted time was much slower then expected, so for me to have a consistent result on the bike (within a few minutes of my PB), meant that I could have gone a whole of a lot quicker if it wasn’t so windy. This got me excited.

I felt most prepared for the bike and I was really happy with how I slowly climbed the ranks out there.

Most memorable comment from Tim – Where are your race wheels? Me – I don’t have any. Tim – WHAT? It’s free speed?!

So now I’m on the market for an upgrade… maybe… feels like a lot to spend on wheels you use a couple times a year. I might be too cheap. Let’s see.

The run was HOT. It was a sunny day and the course did not provide any shade. I was already planning to approach the run with caution. I had only been on 2 runs within 6 weeks leading up to the race because my ankle sprain was taking such a long time to heal. I was even prepared to drop out if I had to…

There are two big hills on the run, but otherwise it is as flat as a pancake. Because hills require more ankle flexibility, I didn’t push it and instead of running slowly up them, I walked it. I ran at a steady pace for the rest of the race and you know what? …. I ended up with the fastest run time I’ve ever had for a half ironman. Just goes to show exactly how bad I am at pacing – fly and die is my usual outcome. Apparently that adds upwards to 5 minutes to your finish time. But I can’t take all the credit… the support along the promenade was also a huge help. Lots of people cheering you on shouting “Animal, Animal”!

Coming into the finish line in the castle was epic. The only downside of finishing in a castle… castles are always on a hill… so I didn’t exactly feel like a warrior coming into the finish, like I did at the start… more like a pleb who had been busy building the damn castle. But overall, I was very happy to see a sub 5:50 time on my watch.

For context… Tim finished the entire race around the time I started the run… so fast.

Oh – and Dan had a good race too. He looks much better at the Finish Line than I do… 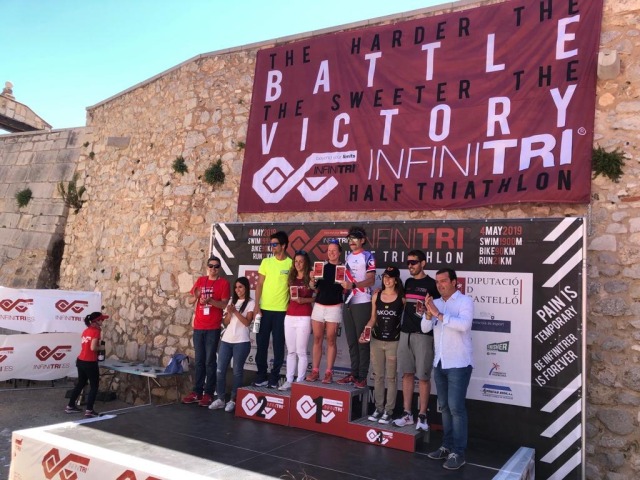 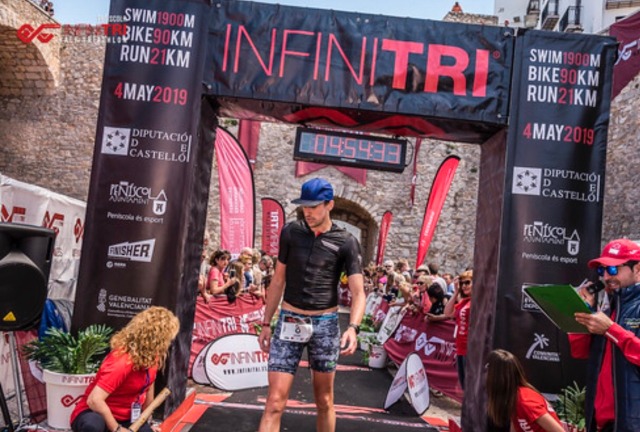 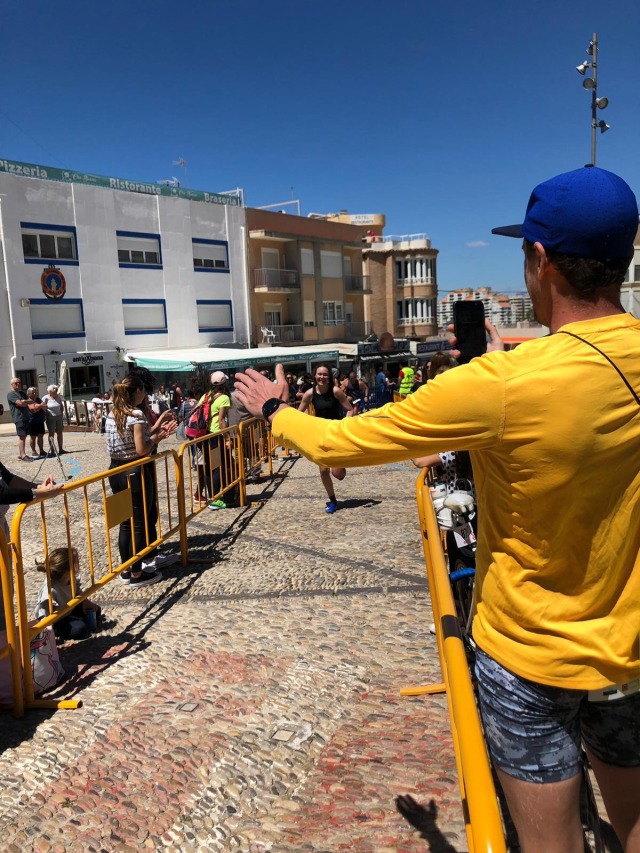 One response to Infinitri Half with Tim Don