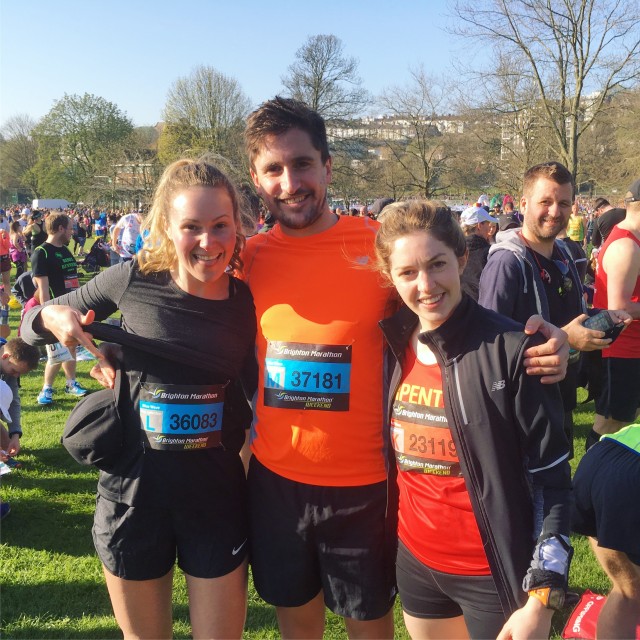 I signed up for the Brighton Marathon with the intention to train for a “Good for Age” finish time so I could race the London Marathon in 2018. Good for Age is sub 3h 45m in my age group, so that was my target. I finished the Edinburgh Marathon in 2013 with a time of 3:55 so I knew that with some dedicated training, sub 3:45 was within reach.

I built out my training plan and in January I was ready to hit the ground running – literally. Unfortunately in week 2 of training I managed to fall down a set of stairs and sprain my ankle…. I tried walking it off but there was no walking this one off. My ankle took 6 weeks to fully recover. I got running again at the end of February and managed to develop runner’s knee (too much to quick). All this, and I am convinced I can qualify. I knew I was stronger and faster than I was four years ago, and I figured that if my fitness fails me I’d at least have the mental toughness to make it through.

The result? I TOTALLY miss judged how tough a 42km race is. To my surprise (and probably me only), I am disappointed to report back that I didn’t get sub 3:45 as planned. But all things considered, I am actually really happy with this race. Here’s the breakdown…

The race was off and I was right on pace despite the heat. I felt strong and having cycled the first half of the marathon course a few weeks prior, everything felt familiar. Dan decided to run with me and we kept a solid stride together. It was actually nice to run with him… I wasn’t sure if it would work but we made a good team.

Up until this point in the race, my knee felt OK… not great, but OK. As soon as we crossed over to the second half of the course, my knee started screaming at me. All of the sudden, the second and unfamiliar part of the marathon course felt REALLY far away from the finish line. The next 10k’s were tough…

Between 22km’s and 32km’s there was loads of support. It was pretty awesome actually. But because I was in so much pain, it felt a little claustrophobic for me. I couldn’t focus on getting past the pain and I also couldn’t enjoy the atmosphere because of it… my pace dropped significantly and I could feel my target of 3:45 slipping away.

At this point, my knee is numb. I remember saying to Dan, “I think I fixed my runner’s knee by running!”.  I took a caffeine tablet, had a gel and I felt focused to get through the next 12k’s without making a meal of it. And then… queue the muscle spasms. Oh ya.

I have NEVER experienced muscle spasms like this before. It was like an electric show: quad-hamstring-calf-feet-repeat! Everything was seising… for a while, I was running with my toes curled under from foot cramps and I could literally feel the blisters forming. At least the finish line was inching closer…

I was so appreciative of the support along the course in those last 5k’s – it felt like the longest last 5k’s ever, which made seeing the finish line by the end of it the absolutes best. As you probably know, I am a competitive person; so in retrospect I’m bummed that I didn’t qualify for the 2018 London Marathon but at that exact moment of crossing the finish line, I couldn’t have cared less. Racing a marathon is such a hard physical and mental challenge, and I know I did my best in the circumstances. I was so happy to have finished! And it was really nice to finish the race with Dan right there too and share that moment with someone. That THANK GOD WE’RE DONE moment and the sense of relief and achievement.

After the race we shared war stories, napped on the beach, iced our legs in the ocean and indulged in some Fish and Chips. 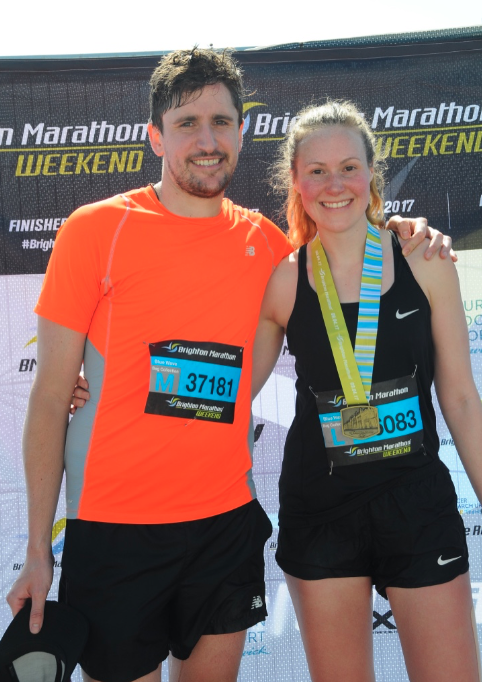 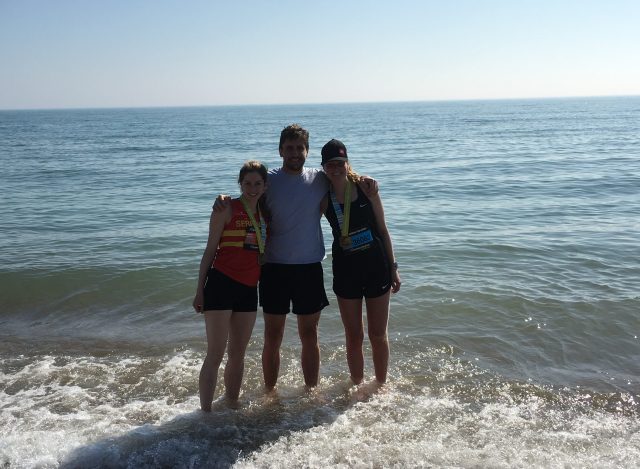 Little did we know that the real race started at the Brighton train station! Racing for a seat on the train ahead of a 1h 30m journey back to London was not easy. From an outsider perspective, it probably looked hilarious seeing loads of people with a post-marathon waddles trying to swiftly navigate the station. We all looked pretty dysfunctional!

We managed to get a seat and on the train home and I found myself searching for the next challenge… maybe another Marathon? Thinking to myself, maybe I can still qualify for London 2018… I don’t think so though, not this year. I need to let my knee heal, and properly build up my mileage to avoid injury. For a Good for Age entry you need to have raced it before Jun2 20th of the previous year, which is just too close.