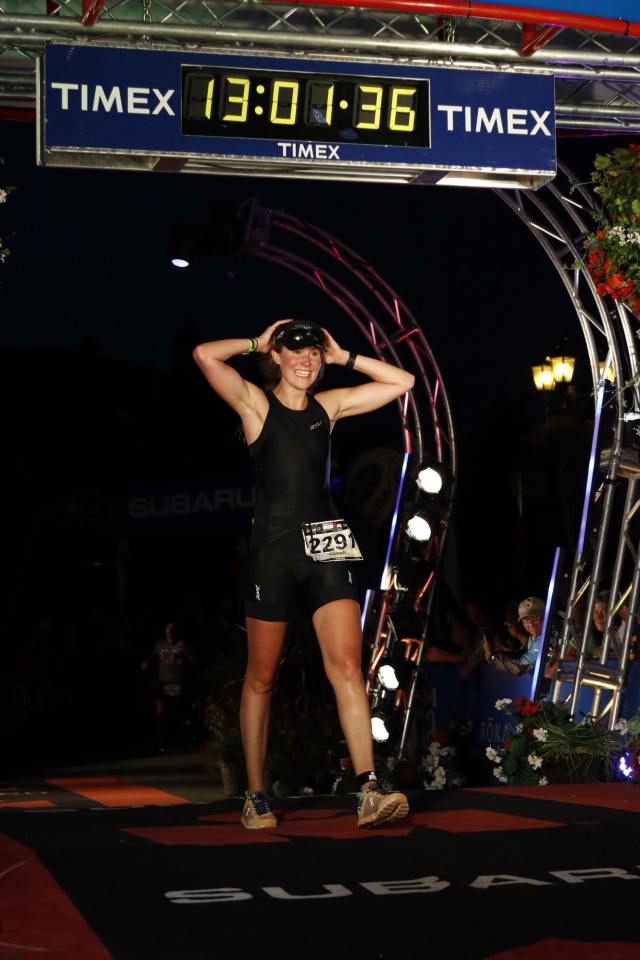 Leading up to the race I knew I had to take training seriously. I worked towards those distances without really taking a step back to appreciate how far it really is. It’s been over three months since the race, and I have been SO LAZY lately. If I had to race an Ironman in my current condition – I don’t think I’d be able to finish it.

To summarize my experience, I would say it was a long day out and an emotional roller coaster.

The high’s are so high: you see your family cheering you on and you have these realizations that you’re going to do it.

But the low’s are really low: you’re out there on your own with a long stretch of road ahead of you and you think to yourself “why did I sign up for this?”

I cried twice and I barfed once… But to cross the finish line…. well that was the best feeling ever.

More on the highs, the lows and the barfing below… 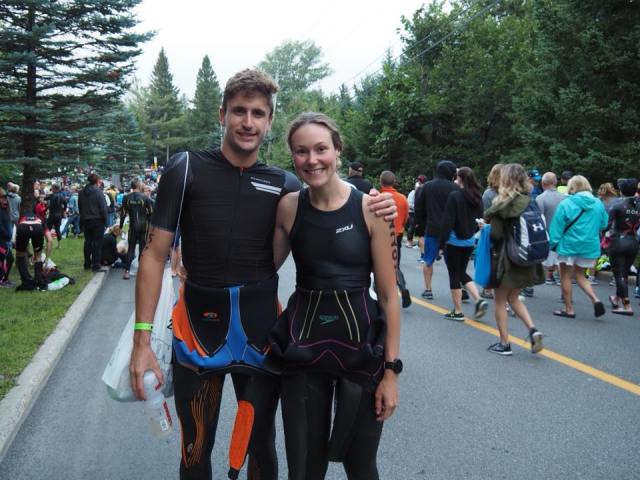 The race start was delayed due to fog on the lake… so nervs were definitely compiling. We were delayed by an hour, which is enough time to seriously question your decision to race.

The fog lifted, and the pros were set off. Unfortunately, shortly after that the fog returned. We started anyway and visibility was pretty bad. The lake was nice and calm but the fog was so bad you couldn’t even see the next buoy you were supposed to aim for. Check out this Live Coverage link to get a sense for how bad it was.

Lots of zig zagging going on… but the good news is, I DIDN’T PANIC!!! WOOOOOOOOOOOO!

I wasn’t shy to draft, I felt strong, and I got out of the water only 3 minutes slower than I thought I would have. I say “only” – I know that’s quite a lot of time by swimming terms… but in the grand scope of an Ironman, I wasn’t going to dwell on it.

My aim for the bike was to average 27km/h which would have got me back to transition in 6hrs 30mins.

The first bit of the course is on a rolling highway. I was on the TT bars and trying to stay within myself, focusing on eating and drinking. I had a smile on my face during this whole section. I was excited to get out there and see what would happen and I was looking forward to spotting Dan, Al and Bren out there on the course too.

The Mont-Tremblant bike course is amazing because you come by the transition area where all the spectators are four times. It’s a figure 8 and you go around twice. As soon as I came in from the first section of the bike, I spotted Dan’s parents cheering me on. Nothing but smiles!! And I was right on track, averaging just over 27km/h.

Then I hit the hills… and thought OK OK OK OK…. The hills are real. I didn’t drive the course leading up to the race so I didn’t know how hilly it would actually be. I definitely ran out of gears and I pushed it a little too hard. But descending was fun and passing the transition area to see Mom and Peter cheering me on was a good mood-booster. 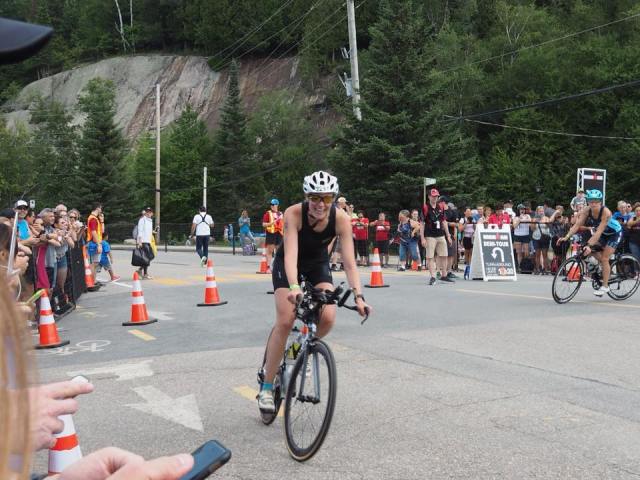 I went from being on a high, to a massive low after that.

It was the realization that I’ve already been on a long bike ride and made it back to transition… and now I have to go back out there and do it again!? Queue the tears…

At around 110km, I ran out of electrolyte drink and water. Dan and I both used EFS Pro Drink during the race – we used it for training too and we both really like it. When I ran out of it, I ditched one of my water-bottles and grabbed a Gatorade at the next aid station. It turns out, Gatorade does not sit well with me… I used to drink Gatorade a lot when I rowed and I never had a problem with it. Not this time…. This is when I got sick. I thought I just needed to burp…. so I was still on the TT bars moving along, and then I barfed! It took me by surprise haha But I felt better after so…. just keep moving right?

The highway felt like a long boring drag into the wind and the hills felt never ending in the second loop. But the closer and closer I got to that 180km mark, the better my mindset.

By the end, I came into transition hot. I got in off the bike 11 minutes later than I thought I would, so I felt like I was falling behind. The Ironman volunteers grabbed my bike and racked it, while I ran into the tent and changed into my running kit as quick as I could. 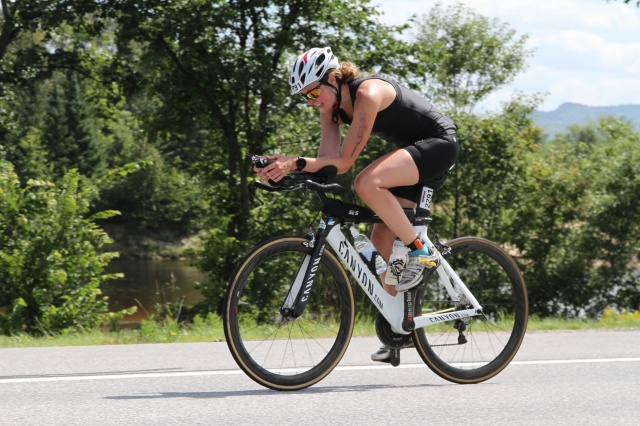 I was SO happy to be off the bike… But with mixed feelings as I didn’t exactly feel up for a marathon.

I originally planned to target a 4hr 30min run time (which is 35mins off my marathon time). But at this point, I threw all expectations out of the window and just focused on moving forward and trying to enjoy the atmosphere. But I knew I had to run quicker than 4hrs 50mins to finish in under 13hrs, so that was always at the back of my mind.

For the first hour, I checked my watch  5-6 times. Every time I looked, my pace was pretty consistent so I thought, just keep doing what you’re doing… it wasn’t until I was half way through that I realized my watch was displaying my AVERAGE pace, not my ACTUAL pace. So I was actually going a lot slower than I thought I was. When I realized this, I had just finished my first loop; people are already crossing the finish line and I’m having to go back out for a second loop. Ya, you guessed it…. bring on the waterworks! This is my second real low of the race. I couldn’t help it – 30 seconds of tears and feeling sorry for myself… 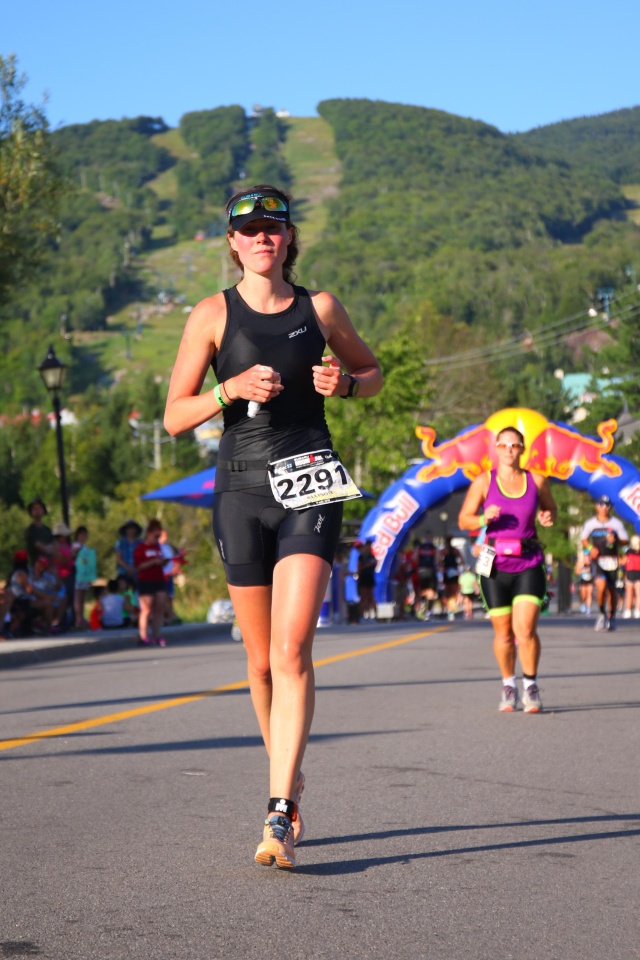 The run course is a desolate out and back trail. Not much going on out there. And it’s difficult to identify a landmark… it all looks the same.

The second loop was hard. My body hurt. It was hot. And I didn’t have much metal drive left in me. My goals turned into very tangible ones. Just run to the next aid station. Walk through and eat. And then run to the aid station after that. It was very slow and steady.

It started to get dark out which was really nice in one way, because the sun wasn’t beating down on you anymore. But on the other hand, I always pictured myself finishing the race in daylight, so still running when it got dark was a bit of a confidence hit… even though I knew it’s because we started an hour late, not because I’m going an hour slower.

I was a wimp basically. Things that don’t normally get to me, were getting to me. And I didn’t have much drive to push on with any sort of grit…. Until I hit the 37km marker… only 5km left! I can do 5km. And if I push it, I could maybe finish in under 12:45! Suddenly I found legs again, and I felt like I was flying!! I wasn’t… but I wasn’t crawling anymore.

It’s the last 100m of the race. I saw Dan there and my family cheering me on. The finish line is in reach… I had to remind myself to slow down and enjoy it, which is a hard thing to do when you’ve spent nearly 13 hours to get to this point. You’re instincts are to get to the finish as quick as you can. But the most consistent advice I got from other athlete’s ahead of the race was to slow down and enjoy the finish line. 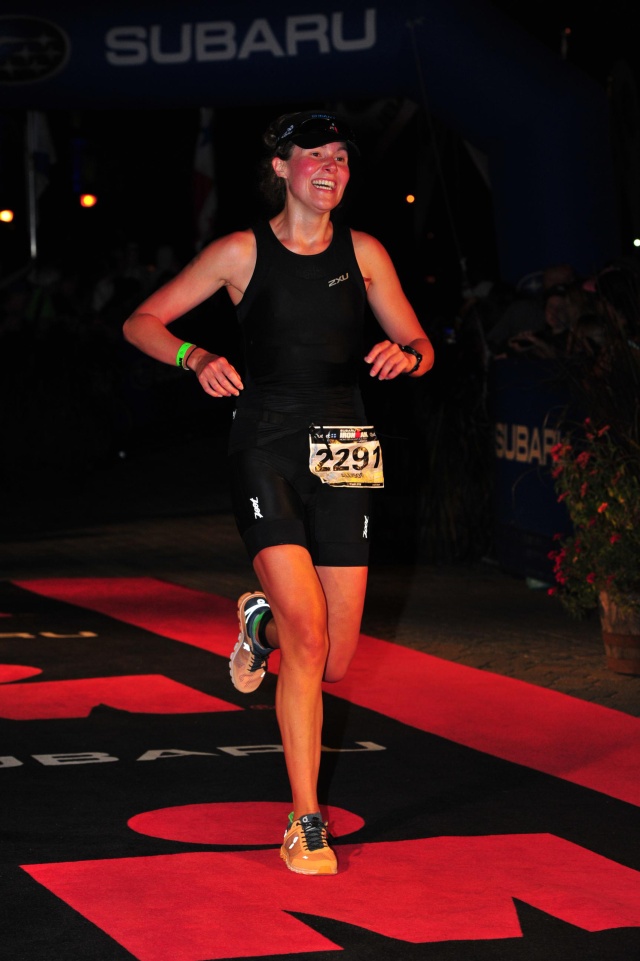 I crossed the finish line in disbelief that I did it. I was so happy and feeling very proud. All I wanted was to see my family and to get a hug from Dan. So I didn’t even go to the athlete’s tent… I got my medal at the finish line and walked off into the crowds looking for them.

I got to the spot they where I saw them cheering me on, but they weren’t there. Andddd then it hit me. OUCH. The adrenaline is gone, and now I’m walking VERY slowly and very stiffly. I looked lost and a little disoriented…. a nice volunteer saw me and asked, “do you know where you’re going”? I didn’t. She grabbed my shoulders very reassuringly, and brought me to the athlete tent where she handed me some food and a blanket. Legend.

I eventually found everyone. They were on the other side of the athlete tent, which was very logical of them lol And I got my hugs. 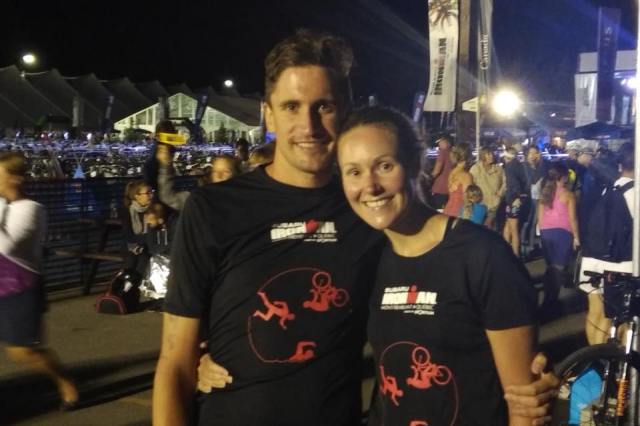 Massive thank-you to everyone who cheered me on and supported me along the way. Special shout out to Sam Village for whipping me into shape, Sam Baxter for giving me your hand-me-downs, Jodie Moss for lending me your wheels, and to Ciaran O’Hara and Tom Walker for sorting out my bike.

Mont Tremblant was heaving with athletes. It was such a good atmosphere. The race was really well supported and the volunteers were all so helpful.

It may have been a different experience if we didn’t stay so close – many people had to take a shuttle into town due to road closures. But we stayed close to old town where transition was so we could walk down to the race in the morning and walk back up after as well. No faff.

Packing up to head back to the UK afterwards… a little bit of a different story haha Thanks Billy! Still no idea how the three of us and all this stuff made it into this car. 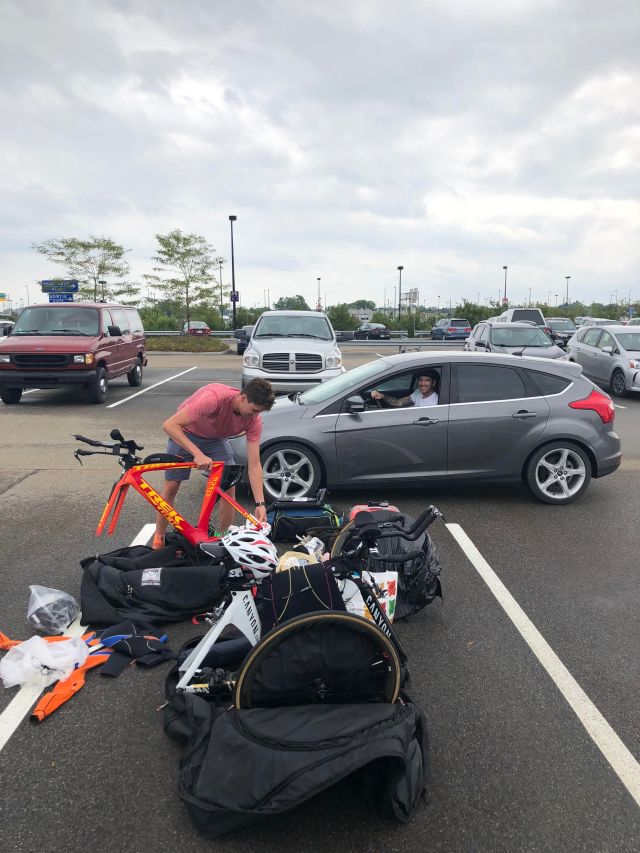 Some other photos from the weekend… 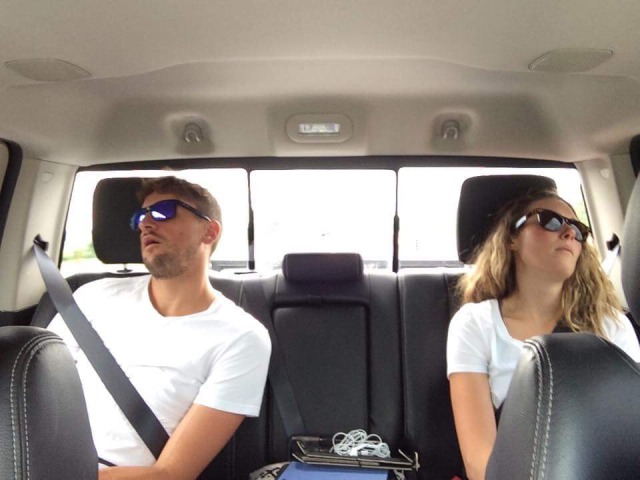 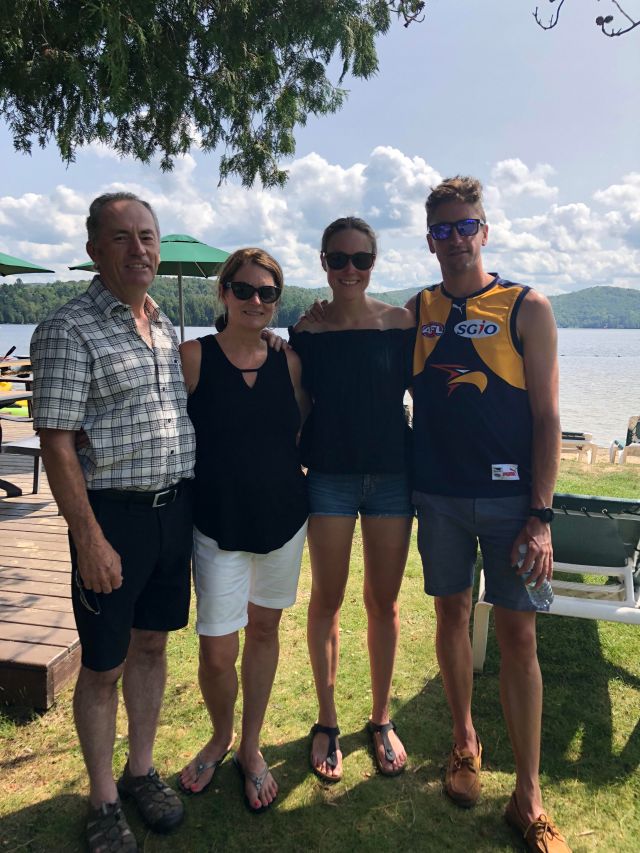 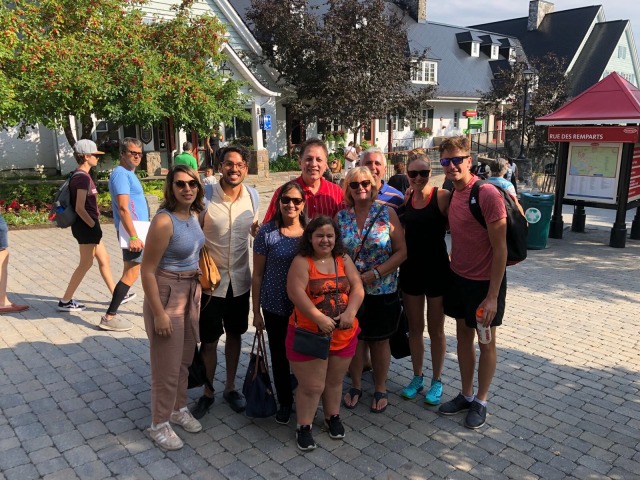 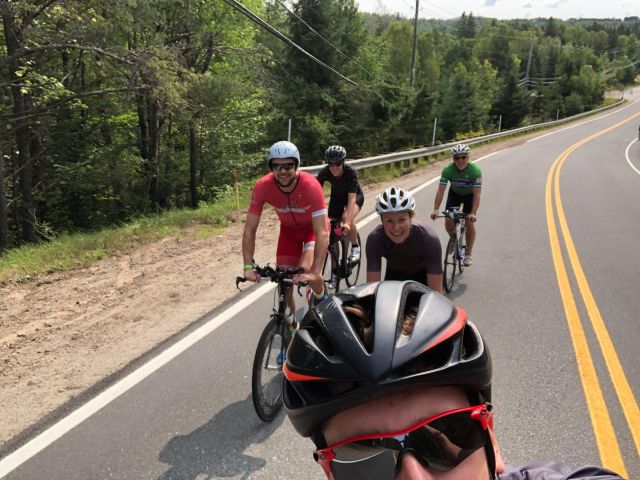 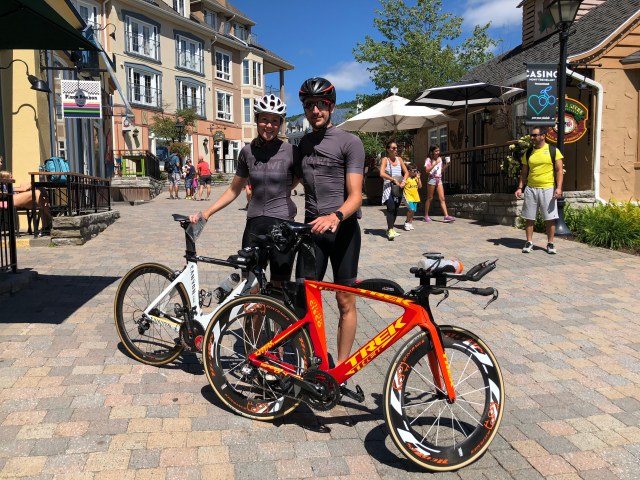 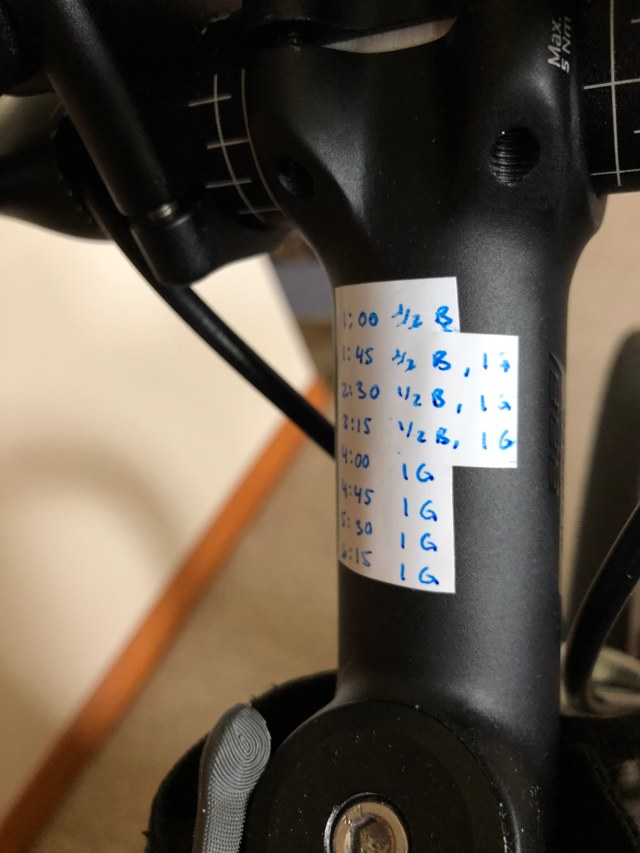 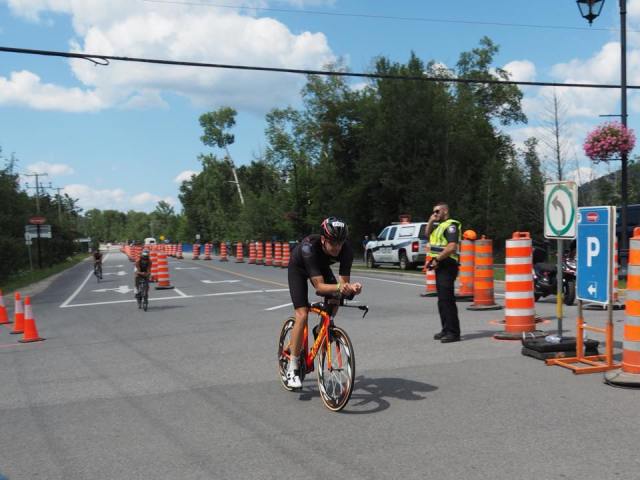 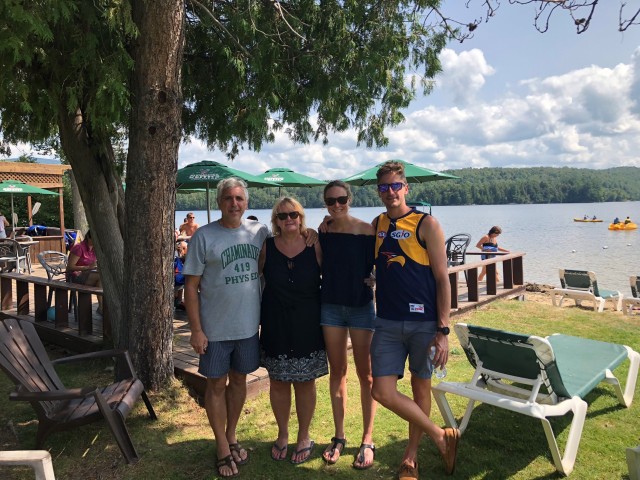 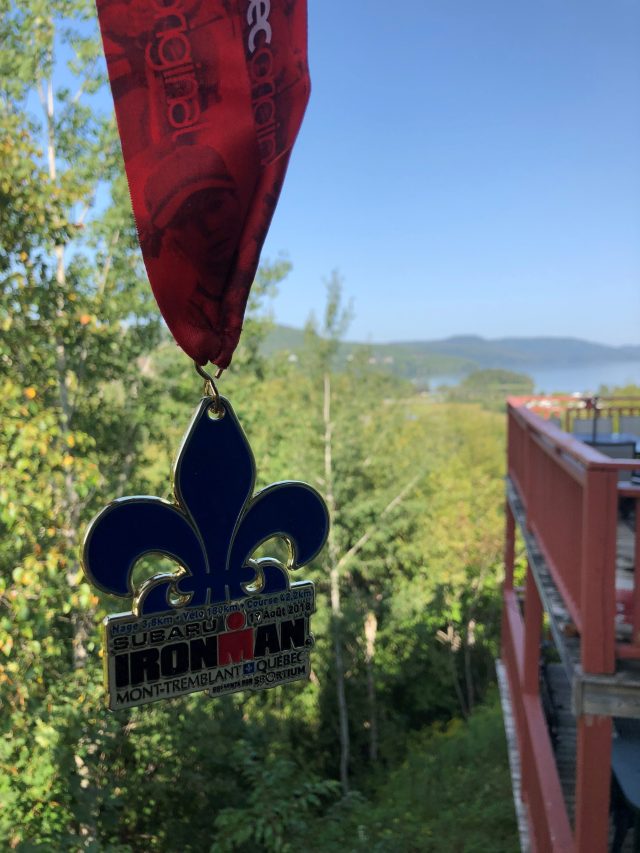