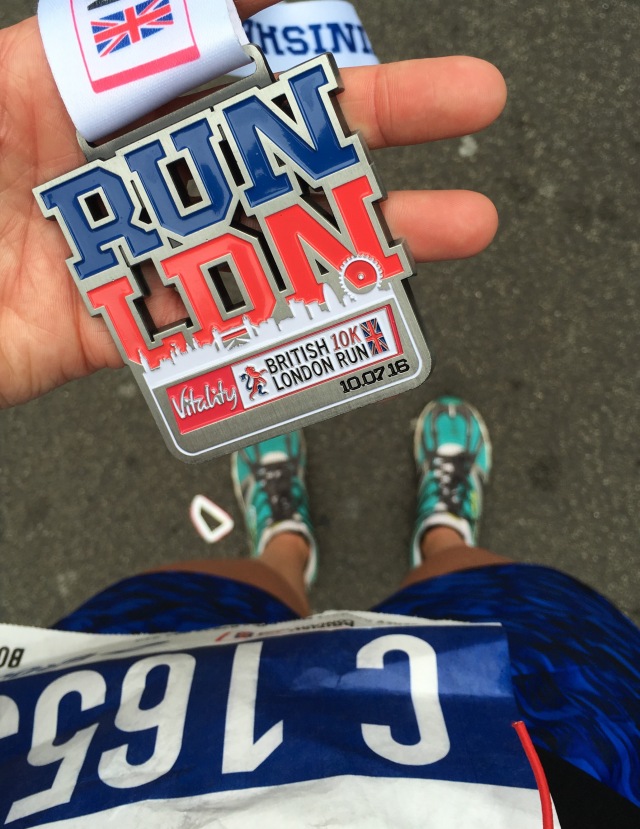 In preparation for the British 10k this year, I wrote a post about setting executable goals. Personally, I was worried that I would approach the race with an expectation to finish faster than last year, and for it to take just as much effort as I recalled it did last year (recalling effort is rarely accurate… a tough race always seems easier in hindsight).

But it turns out this was the least of my worries as there is one crucial thing this year that I didn’t do last year and which I totally underestimated… Crew the Race Across America. I was knackered for about two weeks after RAAM and only started feeling myself again by the weekend of the British 10k. So having an expectation to feel the same during the race as I did last year and finish in the same time or faster was no longer a concern. I do love racing though, so I approached the British 10k last weekend with an open mind and figured it’d be a good test to see how fit I am given the circumstances.

This year I raced the British 10k with Natalia who is a friend from track. Natalia hasn’t missed a single track session all year (unlike me; I’ve unfortunately missed more sessions than I’ve attended this year). Usually we are neck-at-neck at track… Natalia’s typically faster in short distances (-800m) and I’m typically faster in long distances (+1200m). It’s a good mix because we can really push each other.

Natalia finished the British 10k in a time of 42:47! AMAZING RESULT.

In my About page I explain how I’ve learned that small lifestyle changes and dedication can get you places… and how I’ve been exploring this concept ever since. Well missing more track sessions than I’ve attended this year, is not exactly a display of dedication.

Natalia though, has clearly proven my point of accomplishing something great with some dedicated training. I’m very envious of her sub 43 10k time — officially a new goal of mine.

Thanks for the motivation, Natalia! Coming to get ya!

If you want to take on the streets of London in the British 10k next year, pre-registration for the 2017 British 10k London has already opened.

The course is stunning and the support along the course is really encouraging. They set up bands every few kilometers and you pass so many iconic landmarks. I’m a big fan of this race, and highly recommend it to locals and visitors alike.